Connecting a deck of cards with the Bible

The earliest printed source I have is that of the Rev. Taylor, reproduced below. This story is also well known in the form of a song, called “Deck of Cards”, which has been performed by many people (Tex Ritter and Ernest Tubb, among others) but is particularly associated by me with the singer Wink Martindale. The words of the song can be found at www.mamarocks.com/deck_of_cards.htm.

It is impossible to say exactly when this popular folk tale started, but it could be very old indeed. The earliest source I know of is in Durham University Library Archives & Special Collections. Item Add.MS. 1474 of that collection consists of the memoranda book of Thomas Wilkinson (d.1792), a former chief constable of Chester Ward, Co. Durham. It contains an “Account of Richard Middleton, a soldier, and why he had playing cards in church at Glasgow”, taken from a Newcastle newspaper 10 August 1776. [Thanks to Kathy Whalen for pointing this out to me.] 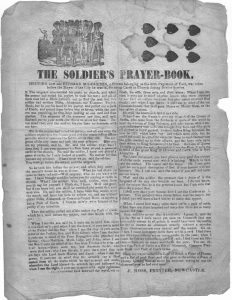 Brian Kitchen very kindly sent me a scan of a copy of this tract, which he found sandwiched between the sheets of an 1811 bible. Clicking on its image will bring up a larger copy of the tract in a separate window; it is large (613K). (Note that this particular version of the tract was not printed until at least 26 years after the Bible in which it was found since the soldier was asked to pray for Queen Victoria, who reigned from 1837.)

From The History of Playing Cards with Anecdotes of their use in Conjuring, Fortune-telling and Card-sharping edited by the late Rev. Ed. S. Taylor, B.A., published by John Camden Hotten, London, 1865:

No history of card playing would be complete without the well known fragment of popular ingenuity called “Cards Spiritualized; or, the Soldier’s Almanac, Bible and Prayer Book,” which, in the form of a half-penny broad-sheet, is still circulated by the poorer classes of our population.

Richard Middleton, a soldier, attending divine service, with the rest of the regiment at a church in Glasgow, instead of pulling out a Bible, like his brother soldiers, to find the parson’s text, spread a pack of cards before him. This singular behaviour did not long pass unnoticed, both by the clergyman and the sarjeant of the company to which he belonged; the latter in particular requested him to put up the cards, and on his refusal, conducted him after church before the Mayor, to whom he preferred a formal complaint of Richard’s indecent behaviour during divine service. ‘Well soldier!’ (said the Mayor) ‘what excuse have you for this strange scandalous behaviour? If you can make any apology, or assign any reason for it, it’s well; if you cannot, assure yourself that I will cause you, without delay, to be severely punished for it.’ ‘Since your honour is so good,’ replied Richard, ‘I will inform you, I have been eight days on march, with a bare allowance of sixpence a day, which your honour will allow is hardly sufficient to maintain a man in meat, drink, washing, and other necessaries that consequently he may want, without a Bible, Prayer Book, or any other good book.’ On saying this, Richard drew out his pack of cards, and presenting one of the aces to the Mayor, continued his address to the magistrate as follows:

“‘When I see an Ace, may it please your honour, it reminds me that there is only one God; and when I look upon a Two or a Three, the former puts me in mind of the Father and Son, and the latter of the Father, Son, and Holy Ghost. A Four calls for remembrance the Four Evangelists, Matthew, Mark, Luke, and John. A Five, the five wise Virgins who were ordered to trim their lamps; there were ten, indeed, but five, your worship may remember, were wise, and five were foolish. A Six, that in six days God created heaven and earth. A Seven, that on the Seventh day he rested from all that he had made. An Eight, of the eight righteous persons preserved from the deluge; viz., Noah, and his wife, with his three sons and their wives. A Nine, of the Nine lepers cleansed by our Saviour; there were ten, but only one returned to offer his tribute of thanks. And a Ten, of the ten commandments that God gave Moses, on Mount Sinai, on the two tablets of stone.’ He took the Knave and put it aside. ‘When I see the Queen, it puts me in mind of the Queen of Sheba, who came from the furthermost parts of the world to hear the wisdom of Solomon, for she was as wise a woman as he a man, for she brought fifty boys and fifty girls, all clothed in girls’ apparel to shew before King Solomon, for him to test which were boys and which were girls,—but he could not until he called for water to wash themselves; the girls washed up to their elbows, and the boys only up to the wrists of their hands, so King Solomon told by that. And when I see the King, it puts me in mind of the great King of Heaven and Earth, which is God Almighty, and likewise his Majesty King George the Fourth, to pray for him.’ ‘Well,’ said the Mayor, ‘you have given a good description of all the cards except one, which is lacking.’ ‘Which is that?’ said the soldier. ‘The Knave,’ said the Mayor.

“‘If your honour will not be angry with me,’ returned Richard, ‘I can give you the same satisfaction on that as any in the pack?’ ‘No,’ said the Mayor. ‘Well,’ returned the soldier, ‘the greatest knave that I know is the sarjeant who brought me before you.’ ‘I don’t know,’ replied the Mayor, ‘whether he be the greatest knave or no; but I am sure that he is the greatest fool.’

“The Mayor called his servants, ordered them to entertain the soldier well, gave him a piece of money, and said he was the cleverest fellow he ever heard in his life.”

This amusing sketch, in the copy from which it is transcribed, is surrounded by rude cuts of a suit of cards, in black, and was printed in Newcastle.

The Chevalier de Chatelaine, well known for his humorous French versions of English poets, some two years since, privately printed a versified account of this story; but he was perhaps unaware that he had been preceded in his own language many years before in an Anecdote curieuse et interessante, sous le nom de Louis Bras-de-fer, printed in Brussels in 1778; and also at Paris, in 1809, a similar flying sheet appeared. Mlle. Lenormand also published it in her Souvenirs Prophétiques.

Dick Atkinson adds
You may be interested in the American version which used to be published (1930s) in the U.S. PLAYING CARD CO.’s Official Rules of Card Games. This closely follows the Newcastle version, with the following exceptions:

So we are still 17 short! This must be a special deck with suit signs decorating the costumes on the courts, or something similar.

So does the extra point needed to make the total 365 come from “rounding up” 364 to 365, or was there a widely known game in which each card was given the values listed above with one of the 52 being awarded an extra additional point? Remember that in 1778 (earliest date of this story) jokers had yet to be invented.

From Brian Kitchen’s scan of the tract, I can read the actual words printed, which are longer than those supplied by the Reverend Taylor. Towards the end they say:

When I count how many spots there are in a pack of cards, I find there are threee hundred and sixty-five, there are so many days in the year.
Stop, said the mayor that is a mistake.
I grant it, said the soldier, but as I have never yet seen an Almanack that was teoroughly[sic] correct in all points it would have been impossible for me to have imitated an Almanack exactly without a mistake.
Your observations are very correct said the mayor. Go on.

So, it would appear that the total of 365 was a mistake after all.